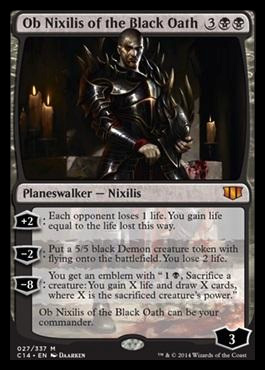 It's spoiler season for the new Commander set. Check out the progress over at MythicSpoiler. When we saw the early spoiler for this set, Teferi was the big reveal with the special text added to his planeswalker card that read, "...can be your commander." In other words, we're getting planeswalker commanders in this set.

So now, the spoiler train is rolling and we've got Ob Nixilis of the Black Oath. Normally, when we see this guy, he is full-on demon diva. But not this time. This time, we see him in his spark state as a planeswalker. Check out the flavor text on Ob Nixilis the Fallen. I wonder what happened? That black oath stuff must be pretty powerful because check out his loyalty abilities.

The +2 gets better the more opponents are out there, but the first +2 activation gets him to 5 loyalty counters. Not bad for a 5CMC planeswalker. Otherwise, look no further than the -2 loyalty ability. Sure, it drops him to just 1 loyalty on the first activation, but you get a 5/5 demon token out of the deal. I can't wait to see the token! His -8 ultimate is similar to Disciple of Bolas. It's an emblem, which so far has been immune to interaction. This set might change that by giving players a way to affect emblems, but if not his emblem gives you the ability to wring your guys out at instant speed for cards and life. Repeatable card draw is powerful stuff.


We're reaching back for flavor on this set, and I can't wait to see the entire spoiler.
Posted by Eric Petracca at 12:31 PM No comments:

With a name like Skullclamp, it has to be good.

Way back, 10 years ago (!) when Darksteel came out, we got the Clamp. It was a mysterious piece of equipment, which was something exciting and new at the time.

At the time, I remember thinking that something went horribly wrong with this card. I'm sure there's a story out there somewhere for what happened, but it's clearly not right. The problem is the "-1" toughness.

But I'm getting ahead of myself. Let's take a close look at what this card is.

It's a 1 converted mana cost (CMC) artifact. Great. It potentially can go in any deck, can come down early, and has the magic word "draw" on it (and I'm not talking the Divine Intervention kind of "draw," either).

It's equipment, which was like enchantments of old, except you didn't automatically get 2-for-1'ed when the creature it was attached to got killed. That was the big problem with creature enchantments (auras). Equipment, on the other hand, "stayed in play" to equip another day. Problem solved. In other words, equipment was already much better than most auras up to that point.

The equip cost of Skullclamp is a very low 1CMC. Sure, it only gives the equipped creature one additional power, but with an equip cost of 1CMC, you can equip over and over as long as there is a target. More on that later. Pretend, for a moment, that Skullclamp's first line read like this, "Equipped creature gets +1/+0." Compare this to another piece of equipment, like Bone Saw or Bonesplitter. If it stopped there, it would be relatively overcosted. It would be better to run Bone Saw. But, it doesn't stop there. Instead, it reduces the equipped creature's toughness by 1.The real reason to run Clamp is not the one additional power. The real reason is to draw cards. Not one card, mind you. But, two flippin' cards. Unless you've been at this for a while, it may or may not be obvious to you how this works. Here's the problem. Let's say you have a way to generate small creatures. Cards like Endrek Sahr come to mind, but there are lots of token generators that will work here. Once you have creatures with one toughness + Skullclamp, you suddenly have a very efficient, colorless draw engine.

Because it draws two cards at a pop, not just one, ripping a dozen or more cards in one go is easy peasy. Or, how about drawing two additional cards per turn with Awakening Zone? Skullclamp is a kill on sight card.

Clamp is an elegant card. Conceptually, it makes one of your creatures slightly more deadly at the cost of being slightly more vulnerable. It also makes it a more interesting process to attack or block into the equipped creature, knowing that you are giving the owner two cards in the process. If that's what this card actually did, it would be a great design. But it's not used that way.

Off the top of my head, I can't think of anything like it. A colorless card with such a low cost to draw that many cards. And it has the potential to hang around to do it again, turn after turn. I don't mind that it exists in the world of Magic, but I'd have much rather it be designed to do what it actually does. Call it a sacrifice knife or something.

For power reasons, this card is banned in Modern. More telling, it is also banned in Legacy. In other words, you have to go all the way to Vintage to run this in a competitive format. For Commander, it's totally legal. Go nuts. Clamp away.

One Sleeve to Rule Them All: Building the Commander Cube

In the past couple of weeks, I've had the opportunity to play Magic with several new groups of people. It's been great. One group is into jamming the most powerful spells in the format. It's still Commander, but it's board wipe city and devastating lock cards from here till the end of time. If you are going to play at the table with these guys, you better come correct. They "go hard."

The other group is almost the opposite. I say, "almost" because they are playing a very different game of Magic, but they aren't doing it on purpose. Six or even eight players jumping into the game is par for the course. Decks are a seemingly random number of cards between 80ish and "stack too big to count." It's not exactly Commander, or any format, per se. It felt like I was back in high school, playing Magic on my lunch break. 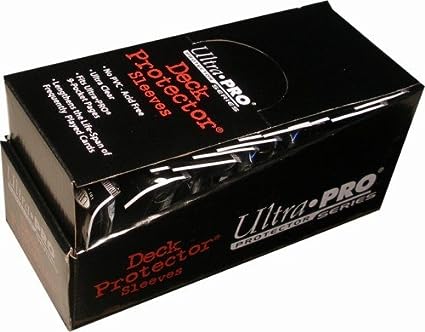 A while back, I posted about building a Commander Cube for rapid deck building. I went ahead and bought a bunch of matching sleeves so that I could put all of my Commander decks into a big pile. This makes building new decks way, way easier. After poking around the ol' Internet for a while, I came across this Commander Cube. This guy is doing it right.

Every color has an identity. Red feels red. Blue feels blue. There are plenty of Commanders to choose from (or draft from). And, the balance between the colors is great. My goal is not to actually draft from the cube. I have another cube for that. My goal is to build something like what this guy has that I can use to build lots of different Commander decks for different groups, on the fly.

Jason Alt over at GatheringMagic.com has been writing a series on building a "75% Commander Deck." The basic idea, as I understand it, is that you don't actually want to tune and tune, you don't want to jam every powerful combo and synergy, into every deck you build. 75% of the way there is actually the right amount for a solid game of Commander.

For the most part, I agree. 75% means different things in different play groups, but if you build with this idea in mind you automatically build a deck that's more interactive, more fun, and a little more random. The Commander Cube concept does this. Instead of putting every conceivable version of a card like Grave Pact in your cube, running only Dictate of Erebos captures the flavor without pushing the theme. This approach also puts an upper bound on the card pool. The cube I linked to is about 750 cards + basic lands. With a pool of that size, you can build dozens of different Commander decks in every color combination. I love bringing a new deck to the table. The Commander Cube is a good, efficient way to do that without dialing it up to 100%.

Instead of evaluating a card and saying this particular card would be perfect in this particular Commander deck, you start looking at cards and saying this particular card would be good in lots of Commander decks. In the example above, Dictate of Erebos is one more mana than Grave Pact, but slightly easier to splash cast due to requiring one less B mana. It can also be flashed into play, giving the card an additional dimension that can be used lots of different ways in lots of different decks. The themes don't get pushed as hard, so the variety goes up considerably. And hey, if you do decide you have the time for an actual Commander Cube draft, you're already there.

A Dark and Winding Path I've been "All in on Black" for a while now. Oh sure, I'll build something else from time to time, but it always comes back to black.

It's just such a sweet color! It draws cards. It has spot removal and mass removal. It has badass creatures. And with the right artifacts and good ol' Karn Liberated, you can cover most of the weaknesses. Plus, focusing my collection on one color means that I can get some serious mileage out of my cards. Grave Titan is good in a lot of different types of decks, for example. He's a zombie. He makes tokens. He combos with stuff. And he's not too shabby to swing with either. What more could I want? The best part of this is that even without going straight tribal (demons, zombies, vampires, etc), lots of other decks can be built in black. Control decks, combo decks, synergy decks built around creatures dying, reanimator decks, token decks, and big mana decks are all in black's wheelhouse. A deck with Endrek Sahr, Master Breeder at the helm plays out very differently than a deck with Drana in the captain's chair. Endrek and Drana may share quite a few of the same cards, but by swapping out 30-40 of the "main" cards, we end up with a token/control deck or a token/combo deck. Another pretty sweet build is the original Ob Nixilis, the Fallen. There are quite a few ways to get additional landfall triggers per turn in black by using fetchlands, panoramas, thawing glaciers, and a few others. Along with some equipment, Nix can get big, fast. Or, since he's draining away turn after turn, you can slow things down with oppressive artifacts and enchantments. Last Laugh, anyone? I'm working on a mono-black mill deck with Geth right now. With token generators like Ogre Slumlord and Ophiomancer, Altar of the Brood is looking like a viable way to flip some libraries. Geth moves thing along quite nicely if you have mana to throw at him. Season with Illusionist's Bracers and Rings of Brighthearth for an even tastier treat. Posted by Eric Petracca at 12:26 PM No comments: