Old School MTG: Breaking the Icy out of Prison


I've never had the singular pleasure of breaking a card out of a tombstone. That is, not until today.

My wife gifted me with some eBay credit, which I immediately turned into a sweet Beta Icy Manipulator. She knows me so well! It was slabbed and graded as a 6. I figured I was doing the world a favor by breaking it out to play with. I mean, it's a 6.

Since I've never done this before, I fired up youtube for a tutorial. I watched quite a few of tutorials until I ran across this one. This guy seems uber-confident.

I didn't have exactly the same tool(s) he used, but I found something similar.

The process was relatively easy. At no point did I feel like the card was at risk for damage. Just keep the first cut up in the corner, away from the card itself.


It made a satisfying crunching sound, like breaking an old piece of hard plastic. I suppose that's not surprising. Debris did shoot off a bit, so plan for that. Make sure someone isn't standing at eye level watching you. Use a piece of paper or point it against something and keep it close to the surface. It's also probably a good idea to put on eye protection. 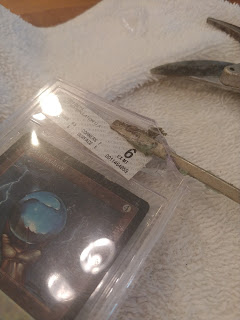 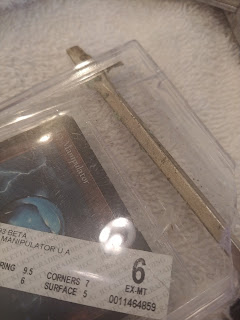 Next, wedge the screwdriver in along the top edge and start to slowly pry it up. The case will begin to separate along the edges where it is welded. It makes a crazy cracking sound. 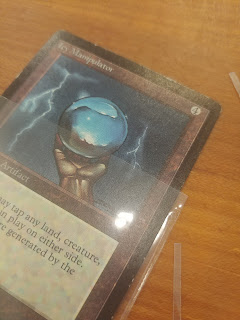 The card itself was sealed on all four sides in a plastic sleeve. I used scissors to cut the top edge carefully. I had to cut fairly close to the card to actually break the seal. Just pay attention to not cut the card. Hold it against a dark or light background (depending on the color of the card border) to create contrast. 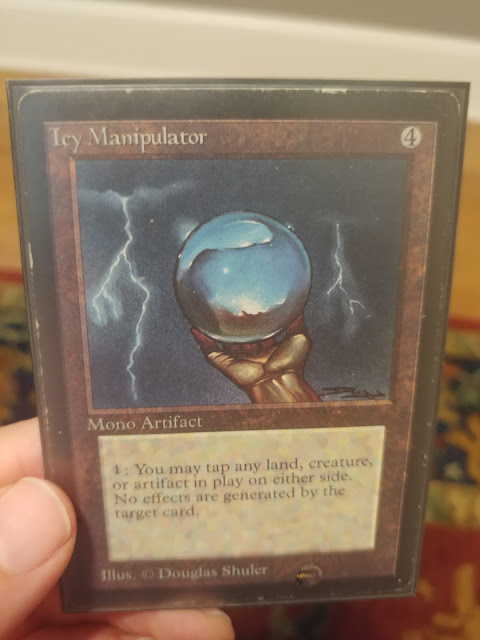 There it is, in all its double-sleeved glory. Ready to play.

I always avoided buying slabbed cards because I didn't want to risk damaging them to get them out. After this experience, I would 100% buy another slabbed card and feel comfortable going through this process to break it free.

If you are buying these cards to actually play with them, breaking them out of a slab is an option. Watch the guy in the video for a tutorial, gather your tools, and then take your time and free the cards!

Posted by Eric Petracca at 10:59 AM No comments:

It's July. That means it's time for something hot. How about Fireballs and Lightning Bolts?

Earlier this year, I played a red Atog deck with Urza lands but I didn't like how it all worked out. So, I decided to try a version with no Urza lands to more reliably cast the red spells off Mountains. There's still an unfair amount of ramp in this build, so the artifact beatdown squad still shows up to the party early. Which is nice.

I'm not getting many games in, but I did have the chance to play a few casual games with Ben at a LGS in the next town over. We invited the local Old School group from Portland and someone even showed up!

I did not dish out any Shivan beats (boo), but I did get to drop some Atog bombs. There's nothing quite like swinging with two aliens and watching the other guy try to figure out how to block to not die to a big board sacrifice.

What I keep coming back to is just how much better Workshops would make these decks. I'm just a simple guy, I guess. With the dual lands put up on the shelf, I'm jamming mono-colored decks that lean heavily on artifacts. A land that taps for three artifact-only many every turn would be fantastic. Who knew!?

The Horde is putting on another tournament within driving distance. It's scheduled for late in August. I'm not sure what deck I'm going to bring, but it's almost certainly going to be jam-packed with artifacts. I'm considering something with a transformational sideboard. Stay spicy.

Posted by Eric Petracca at 5:01 PM No comments: