***Update: 6/22/2019 - It's fitting that I'm just noticing now (in Summer) that I didn't actually push the "publish" button on this back in Winter. Doh! As I recall, this deck made for some very long games. In several games, I held on turn after turn by bouncing the threat with the Time Elemental until I topdecked enough answers to turn the tide.

As we kick off another year, I plan to explore the old school format by building a new deck each month. I expect some cards will show up in a lot of decks, but the goal is to build a deck with a different theme or a different method of executing a theme every month. I'll play the same deck through the entire month and then switch it up to something new when the month ends. Twelve months, twelve decks. 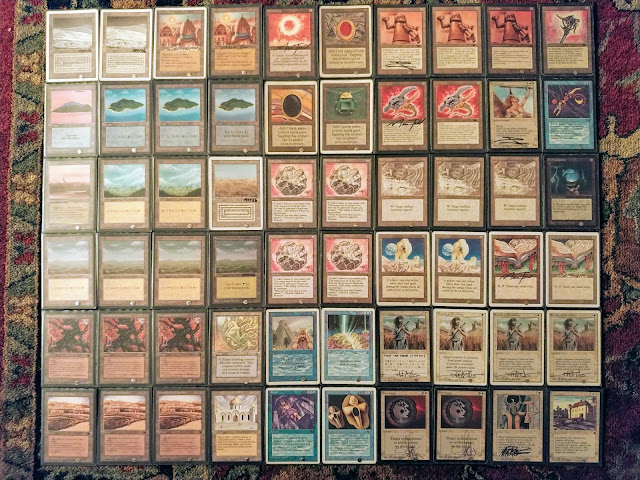 For January, it seems appropriate to build a deck that features Winter Orb. White with a splash of Blue makes for a great prison deck that pushes the theme of a soul-crushing winter, covered in ice and snow. The main win condition is the icy hand of the old winter gods closing around you as the last remaining embers of the fire die out. And robots. Because, if there's anything I love to jam in Old School, it's robots.
Posted by Eric Petracca at 10:26 AM No comments:

That means I'm about halfway through my plan to build and play a new Old School deck every month for the year.

Digging deep into my collection, I've been able to build all kinds of different decks with different play patterns during the first half of the year. But a couple of things are clear. Robots are the bees knees. I want to play aggressively. And, splashing colors is for tournament play.

Robots are the bees knees.

In Old School Magic, there's a handful of creatures at each casting cost that are relatively easy to evaluate in the small card pool. Shivan Dragon, for example, at 6cmc (4RR) compares to Tetravus at 6cmc (all colorless). They both fly. But the Dragon is 5/5 and has firebreathing for the same cost. It's also not an artifact, so it dodges an entire class of removal spells (Disenchant, Shatter, etc.).

In many cases, playing out a Shivan is going to be more directly powerful than playing out a Tetravus. But the robot has all these neat little tricks! It has cool synergy with Tawnos' Coffin, Hell's Caretaker, Priest of Yawgmoth, Sage of Lat-Nam, and more. It can make a wall of flying blockers to buy you time. Plus, I think it looks neat. It rings all my bells. Same with Triskelion. The amount of synergies with that guy is amazing. On top of that, Juggernaut and Su-Chi both have great power-to-mana ratios. Throw in a Clockwork Avian and Jade Statue or two and you've got an entire deck of robots, ready to rumble, no matter what color you are playing.

I want to play aggressively.

I always gravitated to the control role. My guess is because the games felt more like a puzzle. With control, you are engaged in a way that forces you to consider all the nooks and crannies of how things will play out. There's ample room for bluffing. The control role asks you to engage with the game. But now, I just want to slam creatures into the red zone and burn things.

Why the switch? Probably because I don't get to play that often. Slamming into the red zone is either going to work or it's not. Sure, there are still combat tricks to know. There's still understanding when to play into the board, when to hold back, and how to calculate a lethal attack while planning for tricks and the swing back. But it feels like it's more forgiving. And even if that is an illusion, it's a quicker turn most of the time. A lot of the decisions are focused on the combat step and getting the math right.

Splashing colors is for tournament play.

I'm all for people building decks the way they want to. I wouldn't want someone telling me the "right way" to build my decks. What I'm saying is that I find myself saying, "Of course I need to splash black for Mind Twist and Demonic Tutor." Or, "Of course I need to splash blue for Ancestral Recall." We all know there are powerful cards in this format, so powerful that it is likely "right" to splash a color just to run them. And other than Blood Moon, there's little reason not to splash for those spells. They are that good.

There's nothing wrong with splashing for powerful spells. What I find is that they take up slots for other, more interesting cards. They water down a theme. They make decks have similar play patterns. They minimize my enjoyment of the game.

For the last half of the year, I'm going to put the Dual Lands on the shelf and play mono-colored decks. If I'm playing a mono-black deck, then sure, I'll put Mind Twist and Demonic Tutor on the table. But if I'm playing a mono-red deck, I'm not going to put in 4x Badlands and 4x City of Brass just to splash two black spells. This will give me a chance to explore more themes in the individual colors without decks taking on a "sameness" that I've noticed in the first part of the year.

I'd be remiss if I didn't mention that there are some decks with more than one color, but where it's an integral part of making the deck work. I'm thinking of decks like Lich/Mirror where casting Healing Salve or activating Dark Heart of the Wood with Lich in play is what makes the deck tick. Those decks are great. I'm talking about decks that are otherwise all one color but then splash one or two other colors only to jam in a handful of powerful spells.
Posted by Eric Petracca at 6:06 PM No comments: 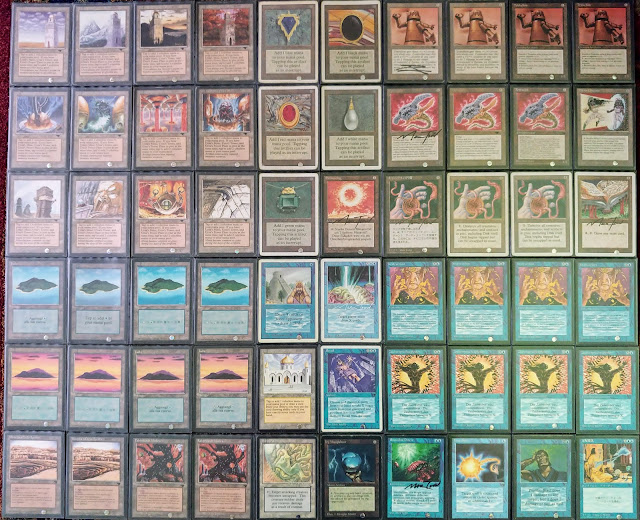 I really, really want to make Tron work in Old School. I've tried a couple of variations this year, but the Old School Tron decks suffer from three things:

1) Every Eternal Central deck has access to 4x Strip Mine and 4x Mishra's Factory.

This isn't a problem, per se, but giving up access to your own Strips and Factories to jam in 12x other colorless lands is an unreasonable trade-off. Too many games in this format come down to who has the most Factories on the table. Going in with less than the full list is asking for trouble. On top of that, going in with a set of lands that only "combo" when a you get a particular set of three in play is a problem when facing off against that many Strips.

2) The Tron lands eat up too many slots that could be colored mana sources.

The only deck where I haven't had a problem with this is the all colorless (Mono Brown) deck that uses the Tron lands in place of the colored lands. Otherwise, I'm coming up with 8-10 colored mana sources in the list. And that's with me trimming Strips and Factories (Problem #1). Even with dancing around double-colored mana-cost spells, it's relatively easy to either not draw colored mana sources or to get pushed out of a color in a game.

3) This format has limited deck manipulation and tutoring.

This isn't like Modern Tron where you have several ways to filter or search for the missing pieces. You need to draw Tron naturally. And even then, it's not like your turn 3 hay-maker is Karn. It's not. You are looking at a turn 3 Triskelion. Not bad, but not usually game-ending. And other than X-spells, there isn't much to do with all that mana.

With all that said, I still played some fun games with Mono-U Tron. The play pattern is similar to a slower Tron variant in other formats, where you play the control role, take advantage with a sweeper, and then drop a beater into an empty board and protect it for the win. Occasionally, when you draw Tron naturally, you can take the aggressive role and start throwing out threats early on the curve and then use permission to keep your opponent from putting up a defense.

Posted by Eric Petracca at 5:19 PM No comments: