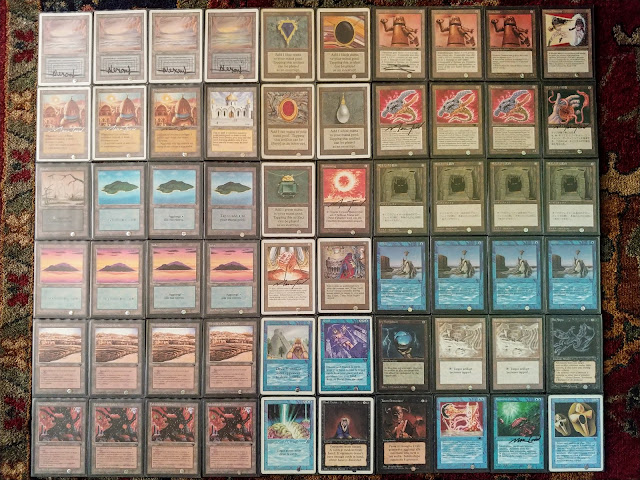 My love affair with robots continues with this new configuration!

The deck is running the Twiddle + Time Vault combo with a few ways to find the one-of Time Vault including Demonic Tutor and Transmute Artifact along with lots of card drawing. Slamming a few Howling Mines onto the table and then taking a few extra turns in a row can leave me with a grip of cards and my opponent buried in an avalanche of card advantage. Under Eternal Central rules, we are restricted to one copy of Time Vault and one copy of Recall. Swedish rules allow four copies of Recall and just recently unrestricted Time Vault itself!

Astute observers will notice that I don't have a Time Walk. Yes, it does seem rather silly to play a deck like this without running the one card that is an extra-turn combo all by itself. You might also note that I am only running a single copy of Transmute Artifact. More copies of that card is almost certainly better. In fact, a 5-color version of this deck that runs face-first into putting the combo together into a Mirror Universe + Fireball kill is better in almost every way.

But I wanted robots!

I didn't have much of a chance to play Old School this month, but I got in a few good games against Troll Disco. 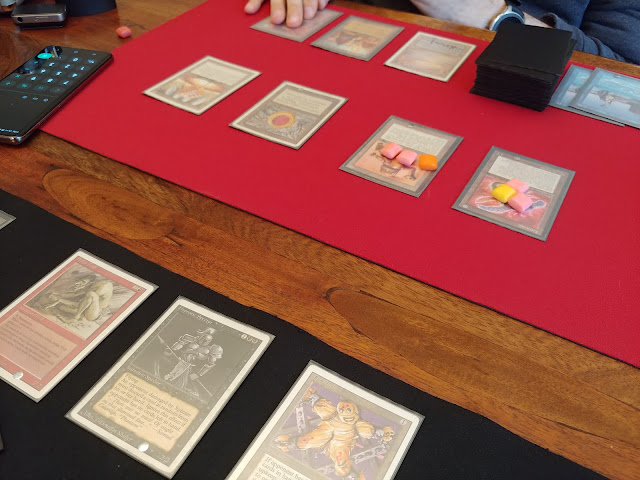 This is me getting wrecked by Chris. He is playing the Robot Turns deck against RB Troll Disco. Note the use of Mini-Starburst as +1/+1 counters for tasty style points. 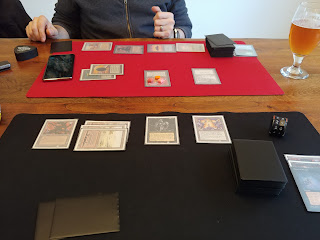 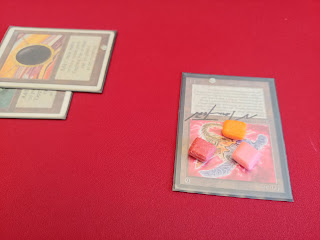 The games were "close" in the sense that the Troll Disco deck was always a turn or two behind the Robots deck. We did end within a few life points of each other. I chalk that up to a combination of Moxes for the robots and no turn 1 Ritual --> Hymn turns for the trolls. Where were the Lightning Bolts?! The robots deck even had a turn 2 Mana Vault --> Twiddle --> Tetravus, which was pretty neat to see happen.

I'm interested to build a different version of the Time Bots deck with a control focus. Old School Mono-U Tron! Tron lands, X-counterspells, and Disks! Maybe next month. I've been working on a list of mono-colored decks (that still run robots / artifacts of course). It's amazing how much variety exists in the card pool in every color without needing to extend into color combinations. Dual Lands need not apply.
Posted by Eric Petracca at 3:26 PM No comments: