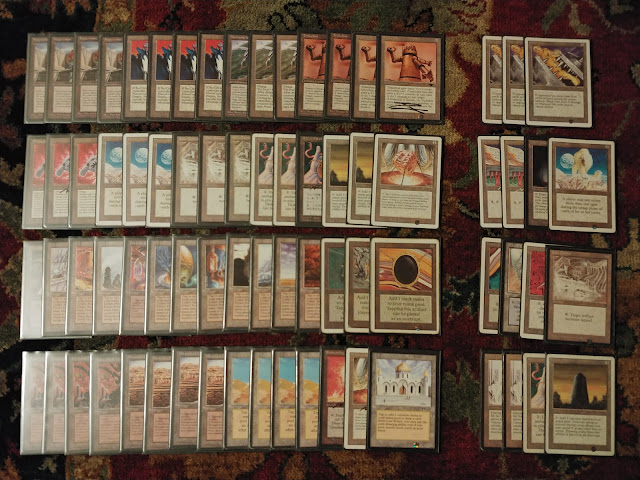 I just got back from the 1st annual Border Brawl (OR/WA), an Old School 93/94 Magic tournament put on by a group called The Horde where 51 players showed up to cast old spells in 5 rounds of Swiss.

For my part, I brought a colorless artifact deck to the table. One of the guys that I drove up with was kind enough to lend me 4 copies of Mishra's Workshop for the tournament, so that powered my deck up quite a bit. I swapped them out for the Deserts. I ended up going 3-2 for the day.

Pre-Tournament : I played a back-and-forth game against Randy Buehler. He had a deck all proxied up for testing. I can't really say what it was, but it looked like he was using Titania's Song as a finisher. I ended up winning that game, but it was a close one.

Round 2: Ken (WR Pink Weenie)
Ken is playing what looks like a typical White deck with Red support. I see Blood Moon, White Knight, and Savannah Lions. I take this round with back-to-back wins. My creatures are bigger.
Status: 2-0

Round 3: Elliot (Goblins)
Elliot is playing a goblins deck with burn, Goblin Grenade, Blood Lust, Ankh of Mishra, and Black Vise. I keep a couple of sketchy openers and get rocked two games in a row. At one point he attacked with a goblin, used Blood Lust, and then used Goblin Grenade on it after damage. We play a third game for fun and it's a lot closer.
Status: 2-1

Round 4: Chris (GBR Aggro)
Chris is playing a deck with Shatters, Argothian Pixies, and other good stuff. I lost two games in a row again. In game 1, he has 2x Argothian Pixies into Time Walk, Regrowth for Time Walk, Bolt, Psionic Blast. In game 2, he has turn 1 Black Lotus into Energy Flux and Time Walk/Regrowth with some beaters out. We played a game 3 for fun, where I had a much more explosive start of Mox Jet, Strip Mine, tap both for 2x Mana Vault into Triskelion on the play. His turn 1 is Black Lotus into Energy Flux again. Despite wiping me out on his turn 1, the game goes on for a while and ends with him at 3 life.
Status: 2-2

Round 5: Aaron (Mono Black Control)
Aaron is playing what looks like a typical mono black aggro/control deck. I see Hypnotics, Black Knight, Drain Life, and Paralyze. I win 2 games in a row, although the last win I was at 1 life. It felt like a great back-and-forth on that one. We were in the "feature match" area, so there might end up being a replay on YouTube.
Status:3-2

I ended the day at 3-2. The cutoff for Top 8 was 4-1. There were a few hands I should have shipped back. The deck is unforgiving of a bad keep since there is no way to dig out. I was also surprised at the number of Blood Moons I ran into in game 1. I'm looking forward to another Old School event closer to home during GP Portland 2018. The Mishra's Workshops really made this deck tick. Being fully powered with the 'shops would be bonkers. I would also bump up the number of disruption cards to make the deck more consistent. Winter Orb is fantastic. Relic Barrier has lots of targets (and synergy with Orb). Max copies of Disk is also a good way to go for next time. There were several matches where Desert would have actually been a great card. Assembling Tron was almost never relevant.

Posted by Eric Petracca at 10:44 PM No comments: