It's August. It's taken all year for the stars to align for me to play an Old School tournament. Thanks to The Horde for organizing the event!

I've built and played a bunch of different Old School decks this year, but that was for casual games at home. For the tournament, I really wanted to give the colorless Tron deck another try. Last time I played it, at the Border Brawl, I had the great fortune of borrowing 4x Mishra's Workshop. This time, I played with Mana Vaults in those slots. It's possible that those slots should have been Fellwar Stones.

It went about as poorly as you'd expect.

Round 1 - Daniel on Ponza w/ Orgg!
In games 1 and 2, Daniel had land destruction turn after turn. I will say that having 29ish mana sources in the deck gave me a glimmer of hope here, but it wasn't much more than a glimmer. He beat me two games in a row. Orgg was the finisher both times. I don't enjoy losing, but if I'm going to lose, Orgg is a new way to do it.

Round 2 - Tanny on GWR w/ Birds, Apes, Elves, and Mana Flare
We played two games. I was able to find a way to win both times, but I was down to 9 in the first game and 4 in the second game. He had burn, so it felt like I was a topdeck away from losing. Tanny said that he was trying out the Mana Flare(s). In game 2, his Mana Flare is what put me over the top. Since I am essentially a big mana deck, giving me access to that much more mana meant that I was able to drop a couple of big threats followed by a Winter Orb and then ride it out.

Round 3 - Carson on UBR w/ Birds, Chains, Bolts, Serendibs, and Power
In game 1, I mulled to 5 and didn't do much much after that. Carson was able to beat me down with him ending at 17 life. In game 2, I decided to enable the "full sideboard." This time he was the one to mulligan to 5 and beat me anyway, ending at 7 life. There was some back and forth in the second game, but I wasn't able to stick a threat long enough to overpower him. He did let an Energy Flux slip out of his hand at one point - which would have totally wrecked me of course - but I was able to keep him off the three mana he needed to cast it. A combination of Strip Mine, Winter Orb, and pressuring him with creatures was enough to stop Energy Flux from coming down, but not enough to stop him from winning.

Round 4 - Jeremy on Pink Weenie w/ Land Tax and Armageddon
Jeremy smashed me for two games in a row with small creatures, bolts, disenchants, and 'geddon. I was able to stabilize in game 1 with me a 8 life and him at 4. He Wheeled into 3x Bolt and closed it out. In game 2, I had some threats out and was pulling ahead when he cast 'geddon and proceeded to beat me down from 26 to 0.

The tournament was 16 players total. I ended the day at 15th place.

In this configuration, the deck simply does not work without 'Shops. Too many times, my turn one was spent playing a Mana Vault and then cutting turns off the end as the damage built up from not being able to untap it. It gets progressively worse when you compare subsequent turns where a 'Shop would have simply untapped and allowed me to produce another threat. In one game against Tanny, I took 9 damage from my own Mana Vaults. Su-Chi is also a problem. Without enough places to sink the mana from it, the mana burn really adds up. In several games this tournament, I took 4 mana burn from Su-Chi and it cut off precocious turns at the end.

I'm enamored with the idea of a transformational sideboard. It's cool to switch modes entirely. The real reason is probably because I am terrible at sideboarding, so being able to swap out the entire thing saves me from having to think too hard about it. While I do think an artifact prison deck could work (especially if it ran White), I'm barely competent to play one version of my deck let alone two. Pulling this off would take a lot more practice. 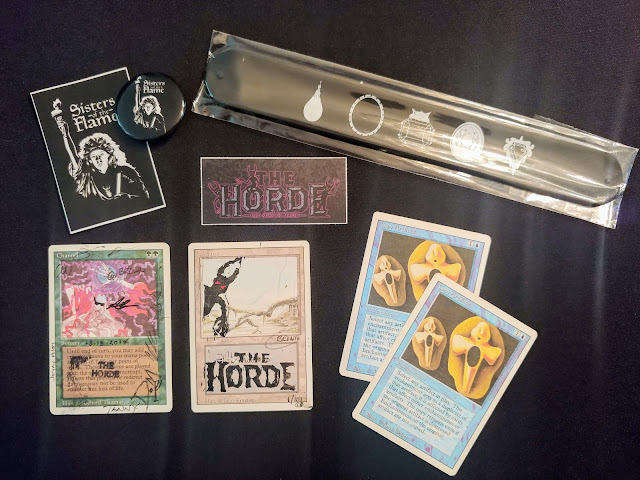 The organizer ended up winning the tournament and gave his prize to the guy that came in dead last (16th place). As I mentioned, I came in at 15th place. The store owner came in 3rd place and decided to give his prize to the next guy at the bottom. Me! I was able to pick up 2x Copy Artifact with my "winnings." Maybe my next tournament will have some color in my deck.

We also had a player join us who was on vacation from New York Sisters of the Flame and brought some swag with him from that group. Thank you! And thank you to the Horde for bringing sweet swag. Check out that mox slap bracelet. We signed cards per the usual. I ended up with a Channel and a Horde Swamp. I have it on good authority that the Horde Swamp is a limited edition 1/100. ;)

Pictures from the Event

Oathbreaker: Colorless Ugin, the Ineffable / All Is Dust

A couple of years ago, I went all in on Colorless cards. Robots! There's something about artifacts that always lit me up. I still scroll to the bottom when spoilers come out for a new set just so I can see the sweet new colorless cards first.

Thanks to MTG Arena, I've had the opportunity to play with the new sets as they come out. It's easy to jump into a game online and playing down in the silver bracket means that I can jam janky decks without ruining someone else's day. I've even been able to play a full colorless deck in Standard!

The metal army can grow quickly and is backed up by a couple of different versions of Karn, Ugin, and Mystic Forge. That's quite a Magic card!

One thing that I don't like about Old School is that I don't get to play with the new cards. It's a double-edged sword. Not having new cards enter the card pool means that there are boundaries. Good cards continue to be good. The metagame can develop in different directions, but not so wildly that I can't adapt a few sideboard cards and still have a chance. Those are all good things for someone that doesn't have the time to play often. The downside is that I can't play with the new cards!

My weekly gaming group doesn't play competitive Magic. They don't play Old School. They play a lot of different games, including Magic. But it's casual. Commander was always too time-consuming for this group. Magic is something we play while we are setting up another game. Or waiting for a game to finish. It's a quick game we play between other things. So, we decided to give the Oathbreaker format a try.

Since I am into colorless cards, this felt like the perfect opportunity to put together a budget Ugin, the Ineffable / All Is Dust deck. Nothing in the deck is more than a dollar or two except Ugin and Dust. Most cards are well under a dollar. The format bans a lot of the fast mana. But you get access to a planeswalker as your Oathbreaker and a signature spell that you can cast only if you have your Oathbreaker in play.

The one-two punch of Ugin and All is Dust works well. The games play out quickly, which meets the criteria for my gaming group. And, the focus on the planeswaker makes for interesting play patterns. The smaller decks at 60 cards compared to 100 cards for Commander also makes the deckbuilding more accessible. If you haven't given Oathbreaker a try, War of the Spark gave us a lot of new planeswalkers at reasonable prices. Give it a try!
Posted by Eric Petracca at 5:37 PM No comments: