Continuing with my Deck in Pictures series, take a look at my 5 color Scion of the Ur-Dragon deck.

One of the great things about building Commander decks is that you can set boundaries or additional "rules" for deck construction to help hold a theme together. This can keep a deck from devolving into a pile of theme-less good cards. For this deck, here are my deck construction "rules:"

There's nothing wrong with combo, but that wasn't what I was going for here. So, no poison or easy pump kills.

You'll see a couple of exceptions to this in the pictures below, but I didn't want to just jam every good dragon ever printed into this deck. I also didn't want to jam good non-dragon creatures and lose the dragon theme.

All I care about on this one is to set a financial limit to what cards can be used in this deck. If I happen to have a fancy version of a card that is worth more than $10, that's fine. The limitation is more about if a card is available at that price, even if it is a different printing.

4) No tutors, except for cards that find land.

It's too easy to put in tutors and take the randomness about of the format, especially with a 5 color deck that has access to every tutor. That's not what I wanted to do here.

5) No double mana symbols of any one color.

In other words, no GG or UU, or anything like that. Multiple colors in a single spell is fine, just not multiples of the same color.

6) As many full art or textless cards as I could reasonably justify.

7) Keep the deck as balanced as possible between the 5 colors and still remain playable.

Same deal here. This is more of a soft rule, but by counting mana symbols, the deck is nearly balanced between the colors.


Even with all those restrictions on cost, expense, creature types, and tutors, this deck works pretty well. This is the deck I bring to the table for a casual game of commander where no one is trying to combo or control the game into oblivion. 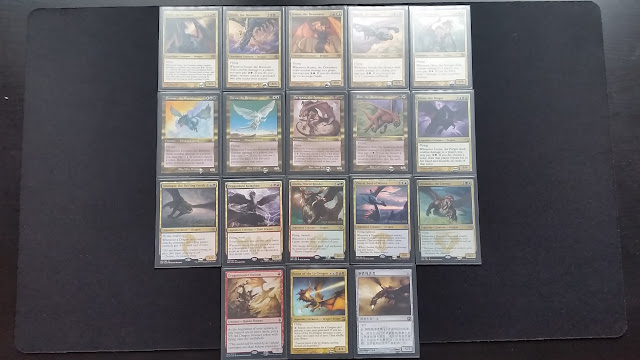 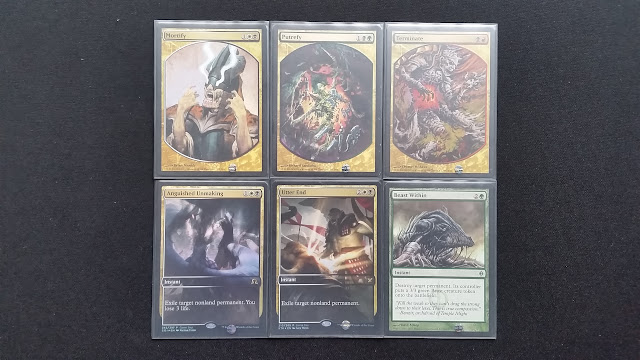 Almost all of the spot removal spells are full art, including the three textless promos and two foil Game Day cards. Anguished Unmaking is has impressive foil artwork. Beast Within is the "Vindicate" replacement, but less expensive to try to stay within the rules. It is also instant speed and only one color, so in some situations it is better than Vindicate. 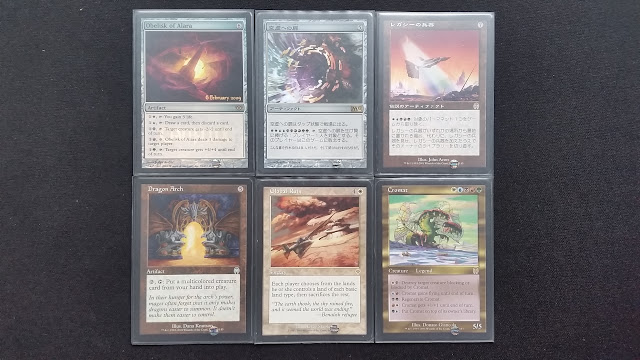 I wanted a handful of cards that "cared" about this being a 5 color deck. This deck includes the foil prerelease promo Obelisk of Alara, a foil foreign Door to Nothingness, and a foreign Legacy Weapon. Cromat is here because if I am playing with a new group, I swap him in for Scion so that I don't get ganged up on and pummeled. 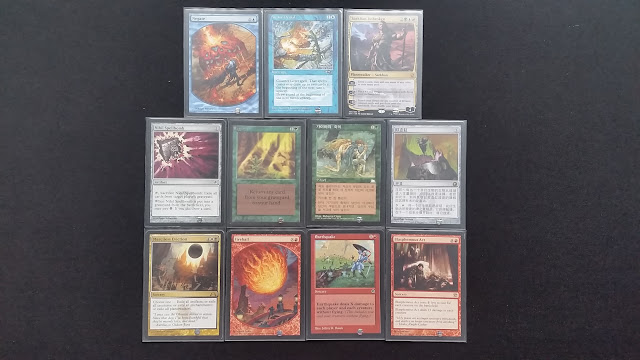 I wanted some version of Sarkhan in the deck. This version fit the best. Otherwise, these are the spells that offer the deck utility to solve particular problems that the spot removal spells can't handle. Textless Fireball and Negate, portal Earthquake, foreign Mimic Vat and Gaea's Blessing, and a Beta Regrowth. 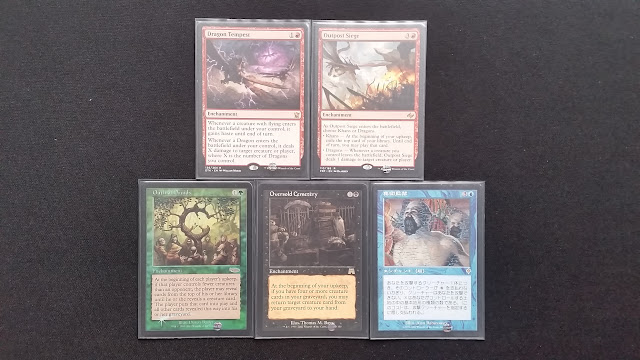 Sadly, I can't run all of the "siege" enchantments because several break the "no double mana symbols" rule, but Outpost Siege does a good job and has sweet dragon artwork. Dragon Tempest replaces the "white" enchantment in the group because, well, it's Dragon Tempest and also has sweet dragon artwork. Judge foil Oath of Druids and foreign Collective Restraint round out the group. 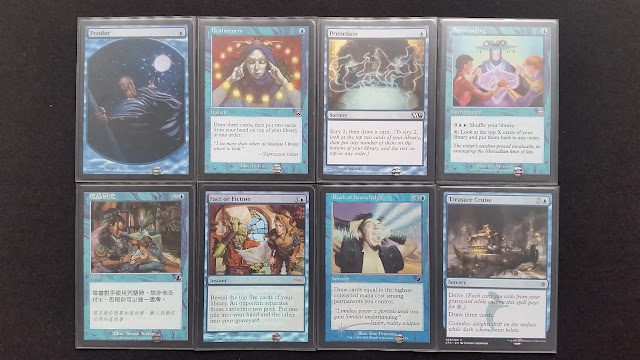 A necessary evil. If I'm not running tutors, there are too many times I get stuck with the wrong cards or the wrong colors. The top 4 cards help smooth things out. The bottom 4 cards help dig me out. Textless ponder with the guy pointing is sweet. Foreign Rhystic Study, foil promo Fact or Fiction with Hanna and Squee trying to figure things out. Foil Rush of Knowledge. 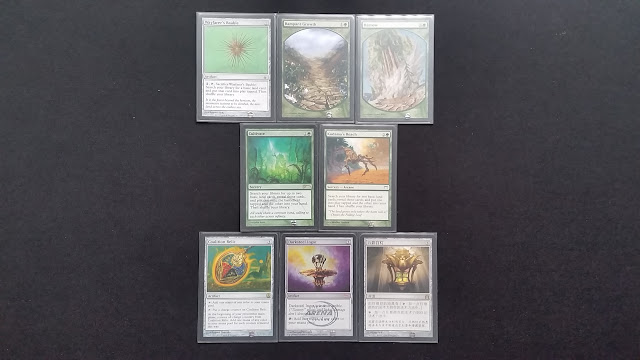 The deck needs lots of mana in lots of different colors. This is how I get there. Textless Rampant Growth and Harrow. Promo foil Cultivate and Darksteel Ingot. Foreign Chromatic Lantern. 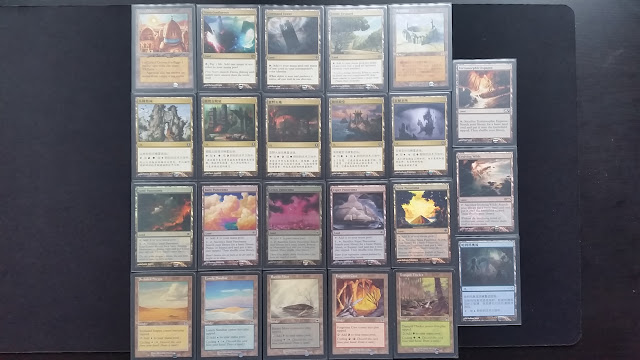 I like about 38 lands in my commander decks. Five 5 color lands including a signed foreign City of Brass, five 3 color lands, all foreign, five Panorama lands, all foil, five cycling lands, two basic land fetches, including the foil promo Evolving Wilds, and a foreign Halimar Depths. 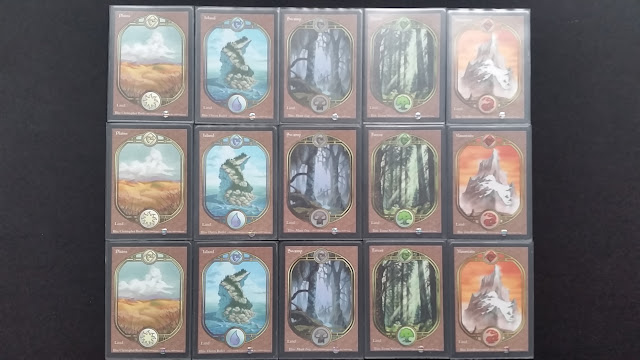 The heart of the deck. Three each of the Unglued full art basic lands. I liked these lands the second I laid my eyes on them and I used to dig through the commons boxes at the card shops I visited and pick them out. Over the years, I grabbed quite a few of these lands out of those boxes.

If you want to zoom in on any of these pictures, check out the photo album.


This deck isn't perfect. There are a least a few other full art cards that could be swapped in here. For example, the full art Expeditions version of Mana Confluence would be sweet. I also like the idea of a "X" spell for each color to go along with Earthquake/Fireball. I have a full art foreign foil Killing Wave that could help push me in that direction. It's not a great card in most situations, but the artwork is amazing! I would also like a cycle of 2cmc enchantments, one for each color. It's just that as weaker cards get swapped in, it can turn a fun, playable deck into a deck that no longer puts up a fight.


Posted by Eric Petracca at 3:19 PM No comments: