Magic is a resource management game.

Magic is a lot of things. It's for collectors, and innovators, and grinders, and players, and families, and friends, and casuals, and thinkers, and everyone in between. But, once you have your deck and you sit down across from your opponent, Magic is about managing limited resources.

I've been playing Magic for a very long time. And no matter what format I'm playing, I fall into the same pattern. I collect a bunch of cards because I think they look cool or because I imagine using them in a deck someday. I build a ton of different decks. I take apart every deck I build, usually after only a few games with it. And then I get frustrated and sell off most of my cards, but keep the cards I know I will want later.

I am fortunate in that I held on to a lot of Old School cards from back in the day simply because I thought they looked cool. Dual lands and power cards have been sitting in my collection for years. Old School gives me a way to use all of those cards and I'm grateful for the opportunity.

You guessed it. I started drafting up dozens of decks and trading for cards to fill them out. I even built some decks, played with them a few times, and then took them apart. The same old pattern emerging again.

I thought I might cut to the chase this time. Which is why it's important to understand that Magic is a resource management game.

In all of those games with the random decks I put together, there are some cards that consistently stand out. Why?

Magic is built on a set of rules, a set of limitations that are fundamental to the game and control how it works and flows. For example, you can play one and only one land per turn. Cards that bend or break that fundamental rule will put you ahead of your opponent. Those cards create a resource advantage for you when you use them. Let's take a look at some famous examples.

Fast Mana
The 5 Moxen, Black Lotus, Sol Ring, and Mana Vault all give you access to more mana than you should have at the point where you play them. For example, playing an Island on turn 1 along with a Mox Sapphire is similar to playing two lands on the first turn.

Extra Cards
Ancestral Recall replaces itself and gives you two more cards for an outrageously low cost. Jayemdae Tome draws and extra card every turn once you are set up for it. Sylvan Library trades life for cards at a reasonable rate as well.

Reuse
Some cards are so good (see above) that you are limited by the game to having only a single copy in your deck. Other cards give you a chance to use these restricted cards again. Regrowth, Recall, and Timetwister are powerful examples.

Think of it this way, if games of Magic started where each player had no cards in hand, the first deck to cast Ancestral Recall would almost certainly win that race. How many times have you been in a similar situation in the middle of a game, one where both players are out of cards and trying to topdeck a threat? The same logic applies.

When you take all of the cards that bend of break one of the fundamental rules in the game and put them all in one pile with ways to protect them, you end up with a famous deck configuration called The Deck.

The reality for me is that I'm lucky to play in 1-3 competitive Old School events per year. There is no reason to have a dozen different decks that I will never get to play. My casual playgroup is just that: casual. Competitive decks need not apply.

In other words, having the cards the build 1-2 competitive decks on demand is reasonable for my situation. Having enough cards to build a couple of different singleton casual decks is reasonable too. Anything more than that is just me being up to my old tricks again.

But playing Old School isn't only about playing the most competitive decks. There's a place for that, certainly. But there's also a place for playing with the cards that excite you, even if they aren't the best. There's something special about putting together a pile and seeing combinations of cards that haven't come up before. How can you best use what you have in front of you? 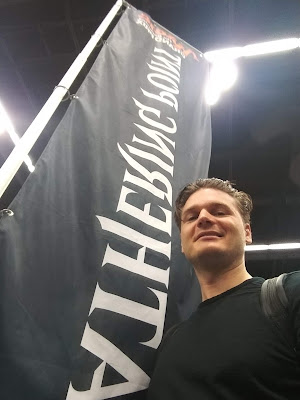 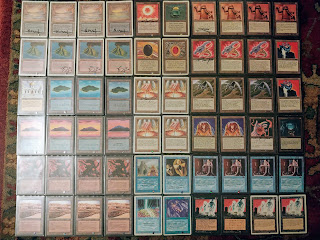 On Friday night, my wife and I met up for some casual Old School with the Horde. We got in a few games and met some great people. The big Old School tournament was the next night, on Saturday, but we had a different party to get to so I missed that one. Next year! 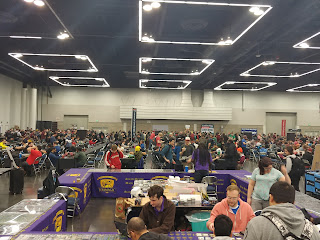 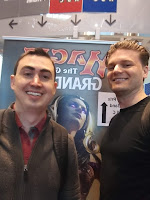 On Sunday, my friend and I entered the afternoon 2HG sealed event at GP Portland. He got his DCI number for the event, and I've never played in a "competitive" 2HG event. We were also both unfamiliar with the Guilds of Ravnica expansion. I expected a slaughter. 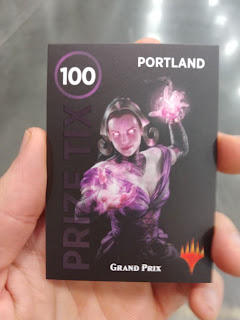 After a rocky first round that we might have been able to win with tighter play, we won our next two rounds for a 2-1 finish. Good enough for a decent amount of prize tickets. We each picked up 10 packs from the prize wall and then headed out.

It was a magical weekend all around, made better by having good friends and family there with me. It also doesn't hurt to leave a GP with a winning record, even if it is for a side event.

Plus, I got some Old School cards signed! 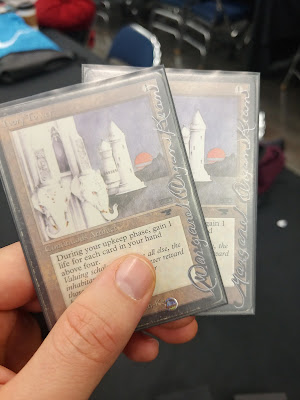 Posted by Eric Petracca at 10:15 PM No comments:

They've created so many, many cards that it's entirely possible to build a workable casual deck using only full-art cards. 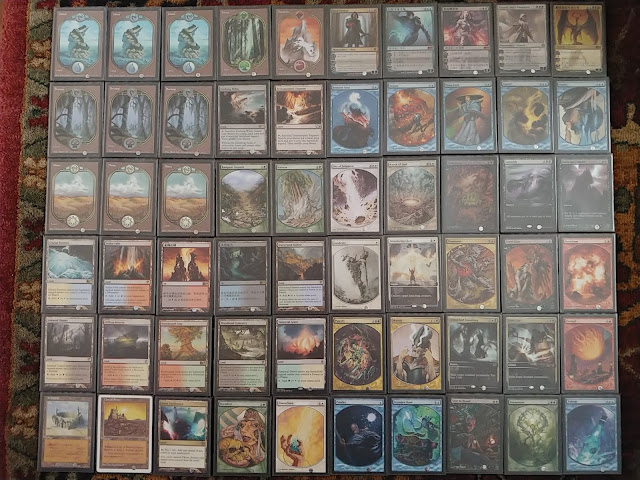 This full-art deck works, even if you only use a single copy of any one card (except basic lands).

The upside of Singleton (Highlander) decks is that the variance means you can play more games and see more interactions before the match-ups are solved. This works great for kitchen table Magic, where it's not about upping your win-loss percentage. Sometimes you just want to play some Magic!

Astute observers may notice that I've cheated a little on running only full art cards. The non-lands are all full art, but some of the lands are not. It is possible to replace the multi-colored lands with full art variants, thanks to Zendikar Expeditions, but the cost of the deck goes up dramatically. I'm not willing to go there. Yet.

Otherwise, what we have here is your basic 5 color control deck: utility, card draw, spot removal, and sweepers. Oh, and win conditions. I'm running 5 Planeswalkers for win conditions, but there are options. Once you establish control, you can win with almost anything.

As it turns out, Planeswalker artwork is visible through the rules box. So, I'm counting them as full-art for the purposes of this deck.

There are more full-art cards on my list to try. Here are a few.

It's like anything else, you can swap cards depending on what you are up against or how you like to play. It'll still work. If control isn't your thing, build an aggressive full-art deck instead. Here's a full-art Glorybringer to get you started.

Posted by Eric Petracca at 2:22 PM No comments: