For November, I decided to go green.

I wanted to explore the interaction of Sylvan Library and Untamed Wilds while ramping into big robots. I tried a couple of different configurations, ultimately ending on the one pictured above. Nothing worked the way that I wanted. These decks are for casual games, so I'm not looking for anything spectacular. But I am looking for something interesting. This isn't it.

And yes, I did use four dual lands in place of four basic forests. I didn't have legal basic forests for those slots, so I used G/x duals instead. First world problems.

I considered using Titania's Song to turn my other artifacts into robots. That could be a fun way to use a lot of different artifact cards and still have a way to win in the end. But I think a deck like that wants to be a prison deck and that's something I am trying to avoid for casual games. 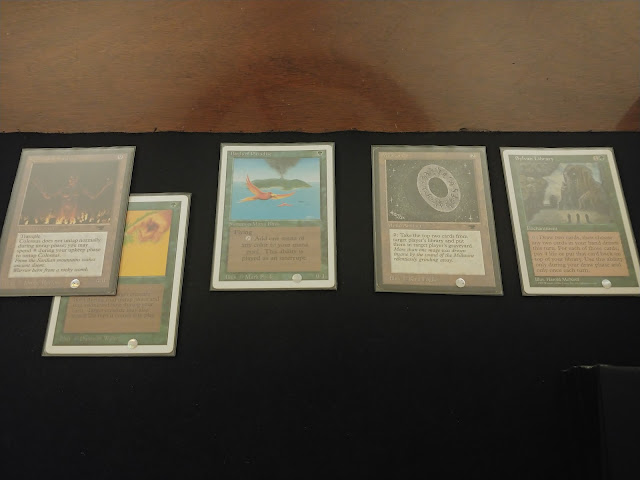 For the record, I did use Reinarnation on a Llanowar Elves to bring out a Colossus of Sardia. I also had a game where I landed Instill Energy on a Colossus. I had a game or two where I had Sylvan+Millstone working. It didn't feel as powerful as I imagined it would, but I think it's because the rest of the deck isn't that powerful. What I'm saying is that the deck worked. It did what it was supposed to do. I just wasn't feeling it.

A deck that aggressively tries to pitch big robots and use Reincarnation to get them back might be fun, but then again it may only seem like fun because I like reanimator. Black and even white are probably both better color options for this strategy anyway. A deck that splashes white for COP:Green to go with Force of Nature might be fun, but I'm also trying to avoid splashing a color this year. And, if I was going to do that, I'd use COP: Black and Lord of the Pit because it's a demon!


Posted by Eric Petracca at 2:09 PM No comments: