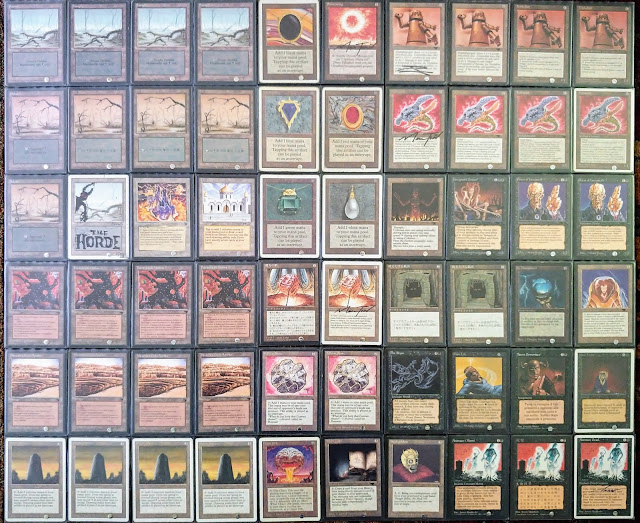 I'm playing this deck all month, just for casual games. It's quite fun!

It's heavy on mana sources, probably too heavy. Basalt Monolith is good with Priest of Yawgmoth for ramping to 6 mana to cast the robots. It even gets to 9 mana with relative ease for Colossus of Sardia, although untapping it is a challenge. Still, getting in there with one big attack isn't bad and then saccing the Colossus to the Priest to cast a huge Drain Life is a neat trick.

Going up to 4x Animate Dead is probably right, more right than running Skull of Orm in that slot. But the skull is so cool! Another little book is probably also right, shaving a monolith. Otherwise, the play pattern seems fine. Drawing cards is an issue, but that's true of most non-blue decks. The pair of Howling Mines is symmetrical, but this deck wants to tap out with threats every turn so they work better than big books. Against a competitive deck, they would be a liability.

I tried running Su-Chi in an earlier build of this deck thinking that saccing it to the Priest would be neat. It would produce 4 black mana from the Priest's ability plus another 4 colorless mana from the Su-Chi's ability. But more often than not, the Su-Chi would die at an inopportune time and I would take mana burn. There's probably an even more over-the-top version of this deck that maxes out Priests and Colossus. Colossusi? Colossuses? Colossuses. We'll go with that.

As you might expect, sticking an Abyss and playing a critical mass of artifact creatures will eventually grind out any opponent that doesn't have a way to stop it. That's not exactly what I was going for here, but it's won me a couple of games I had no business winning otherwise.

Posted by Eric Petracca at 6:32 PM No comments: 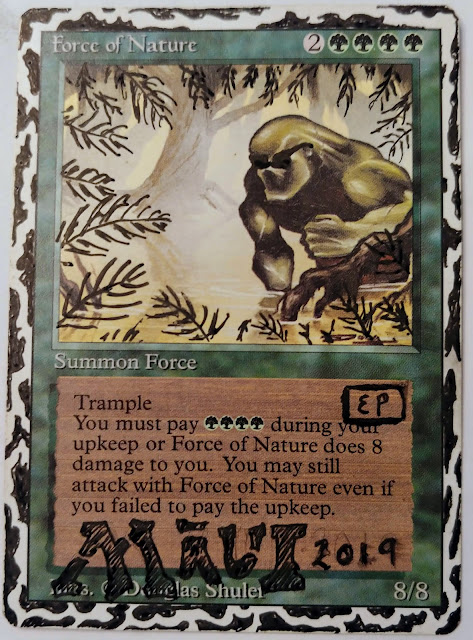 I just got back from a trip to Maui. Everything looked just like the pictures! Of course while I was there I had to look for some old school Magic cards.

I searched Google for local MTG stores. Pickings were surprisingly slim. Maybe all that beach and sea air means that less people are interested in playing games like MTG. But I found a store that said it sold Comics and Cards (Maui Comics), plugged it into Google maps and headed that way.

Ben was driving. Since neither of us were familiar with the area, we followed the directions exactly and ended up in what looked like an industrial/parking area. Ben parked and we walked in a wide, unlabeled entry hallway. Concrete floors, no signs, propped open doors.

I've seen some strange places for a MTG store before, so I would not have been surprised if someone converted warehouse space to have a large enough play area at a small enough price per sq ft to make a profit running a gaming store. As we walked down the hallway, it was marked with signs like, "Emergency Exit Only," and, "Employees Only." That didn't seem right. But hey, we were tourists in Maui. It was turning into an adventure!

Eventually, we emerged into an open-air shopping mall. We had apparently parked in the back, where the employees park. Thanks Google.

I will say that I've never been to a shopping mall with multiple fruit vendor stalls, but I guess fruit is a big thing in Maui. We found a map posted by the "rules of the mall." The rules were surprisingly comprehensive. It's like the warning on your hair dryer about not using it in the bathtub. You know someone tried and found out the hard way that electricity and water do not mix. The rules were like that in the mall: Wear a shirt. Wear shoes.

We walk into Maui Comics where a couple of guys are sitting behind a counter. One guy has earbuds in and is watching something on his phone. No other customers are in the store. And I only see rack after rack of comics. No MTG cards. No display cases with singles.

The guy without the earbuds makes himself busy, so I walk up to the guy with the earbuds and ask him about MTG. He points at an open box of Throne of Eldraine boosters on the counter in front of him. Thanks, but do you have singles? He pulls out a (I kid you not) Ultrapro trade binder and sets it in front of me. So, these are the singles? Yes. Hmm. The other guy grabs a 10,000ct box and brings it over. The box is labeled "bulk."

I flip through the trade binder. It's mostly modern stuff, mostly from ELD. Huh. I ask him if people play Magic in Maui and he looks up from whatever he is watching and says yeah, probably.

There were a total of two old school cards in that entire binder. A Revised Force of Nature, which I gladly bought for double the going price, and a Revised Disrupting Scepter.

Once I saw the Force of Nature, I knew I needed to alter it to commemorate my trip. Magic cards are some of the few possessions I have running back 20+ years. It's fantastic to be able to pull up a card I've been using for years and years with all the memories that go along with it. A commemorative card like this is perfect.

I did the card alter with a normal, black ink pen. It takes forever to dry, but it will dry. Just leave it out and put a hairdryer on it for a while. The ink smudges a bit, but you can blot it once it's no longer shiny anywhere. After blotting and double-sleeving, it's good to go. If you have access to an "ultra fine" tip Sharpie, that's even better. It dries faster and doesn't smudge as easily.

It looks like a green deck is in my future. Let's stomp, Maui-style.

For comparison, here are the before and after images. 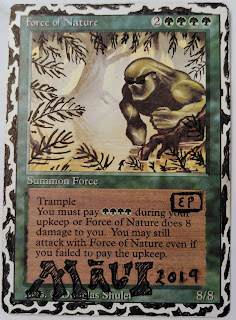 Posted by Eric Petracca at 3:17 PM No comments: