Ben, Drew, and I made the trek to GP Vegas this year. Spirit Air FTW. I played 7 rounds of Legacy with UB Reanimator against a massive field of players, going 4-3 drop.

I'm calling it the Dinner Bracket.

You know, when you drop so you can go get dinner. The dude was throwing shrimp tails up onto his hat and made a volcano out of onion slices.

Round 2 - Sneak n' Show (Rik)
Record: Win 2-0
Notable: Game 1 was an early Griselbrand. Game 2 we locked each other out. He had two Cages in play. I had a Needle on Sneak and countered all of his Shows. Ended up winning with a hardcast Grave Titan.

Round 3 - Storm (Ross Merriam)
Record: Loss 1-2
Notable: Beat him game 1 with a triple Force of Will turn, which is apparently the level of craziness needed to beat Storm because I lost the next two games.

Round 4 - Stoneblade (Brandon)
Record: Loss 1-2
Notable: Screwed myself Game 1 when I didn't draw 7 in response to him killing Griselbrand.

Round 6 - UR Delver (Mike)
Record: Win 2-1
Notable: Lost game 1, but came back in the next two games with sideboard cards.

Round 7 - Patriot (Felix)
Record: Win 2-0
Notable: He was Swords-ing everything. But I boarded in the Angels, so I had too many targets for him to control.

Round 8 - Dinner (Benihana)
Record: Win
Notable: Sat with the guys who produced the crazy Hour of Devastation reveal show.

I also got a few cards signed while I was there. There's some real progress happening on my Old School 93/94 deck. I even got the first card at the GP signed by Jeff A. Menges (Swords to Plowshares). Drew Tucker signed the Plateau with the wrong art, with the words, "I didn't draw this" on top of the signature. (He asked me first.) Let's see if I can get the actual artist to sign it, too. Fingers crossed. 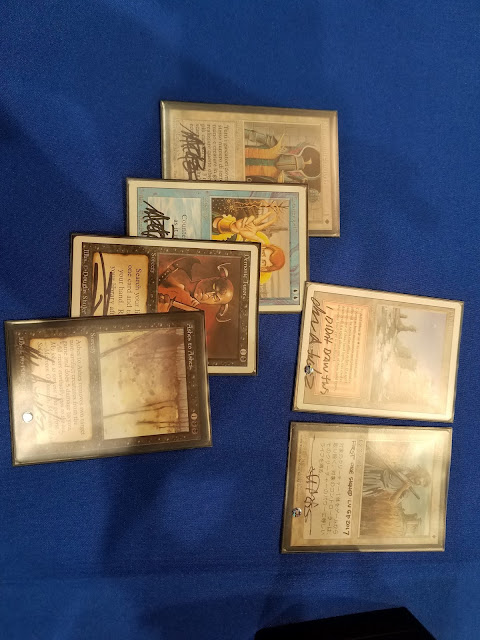 Speaking of Old School, I watched the first couple rounds of Old School at the GP. Hippies, Sink Holes, and Juzams galore. Moxes, and Ancestrals, and Time Walks, Oh My! Nothing quite like shooting the breeze with Randy Buehler with $50k+ of cards on the table.


Posted by Eric Petracca at 8:04 PM No comments: