Taking it Back to the Old School 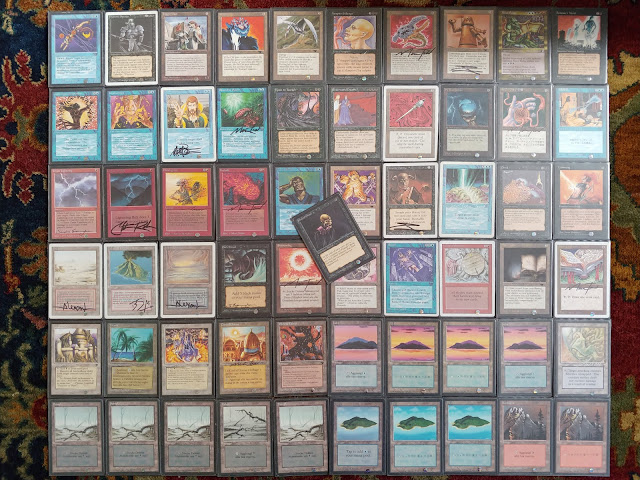 As I head into the end of the year, it's a time to look back and how things went. 2018 was going to be the year of going colorless - and it was for the two times this year that I actually got out to a competition.

Early in the year, I played in a Modern FNM at the closest local game shop to my house. I put a colorless Eldrazi deck together for that event after trading like crazy with the intention of going at least once a month to throw down. I wanted to recapture some of the LGS feel from several years ago when the Commander scene started to blow up and I was there every weekend. The games were good, the crowd was good, but it didn't really click for me and I never made the time to go back.

More recently, I journeyed up to an Old School event put on by a local group called The Horde. It was a couple hours away and took up the entire day, but it was a great experience. And yes, I ran a colorless pile into that event, too. Good games, good crowd. Plus, I enjoy the nostalgia of playing with the old cards, more than I even expected that I would.

The rest of the year, I played casually with friends and family. My kids started to get into Magic this year, so we've played quite a few casual games with new decks as they learn the ropes. It's amazing to be playing my favorite game with my kids using the same cards I had when I was only a few years older than they are now.

Going into next year, I've already started making more trades online to pick up Old School cards to build into different decks. My casual Old School decks are singleton and don't include power cards. They are casual, after all. And, they remind me of playing with starter decks from back in the day when your "deck" was simply all the cards you owned. As it turns out, removal is still removal, and countering a spell still works. Lightning Bolt still does 3 damage to any target. Disenchant still destroys an artifact or an enchantment. In other words, as long as your deck is threats+removal+lands+utility, you have a decent shot now matter whatever your opponent is doing at the kitchen table.

The last time I played Vintage was GP Portland 2017. It was a side event on a Sunday. I was looking forward to something similar at GP Portland 2018, but it was not to be. There is no Vintage on the event list. The Horde is running a separate Old School competitive event during the GP, but I have a scheduling conflict so I won't be able to make it to that one. There is a non-competitive event the night before, though. The person that I was playing Legacy with from time-to-time moved away this year, too. Things falling apart?

Magic has been a huge part of my life for a long time, at least in my mind. In reality, I play competitively once or twice a year and it seems like even those opportunities are less and less. But I do spend a lot of time thinking about Magic, reading about it, watching game play videos, and generally keeping up on what's happening with the game. Is that a good thing? Maybe. It's like watching a commercial for something over and over, then finally getting it, and realizing that maybe you didn't need that thing after all.

Things change. Maybe that's all it is. Playing a few casual games of Magic with friends and family is how it was for me at the beginning. It was about running a card because I had it, not because it was the best in slot. Nine times out of ten, I cast a Khabal Ghoul and it does nothing but act as a speed bump, but every once in a while it grows and grows and grows. Maybe that's good enough. It's not that the card makes me win. It's that the card has a cool skull guy on it. It's old cardboard. It reminds me of times passed. It gives me the feels.


Posted by Eric Petracca at 1:15 PM No comments: