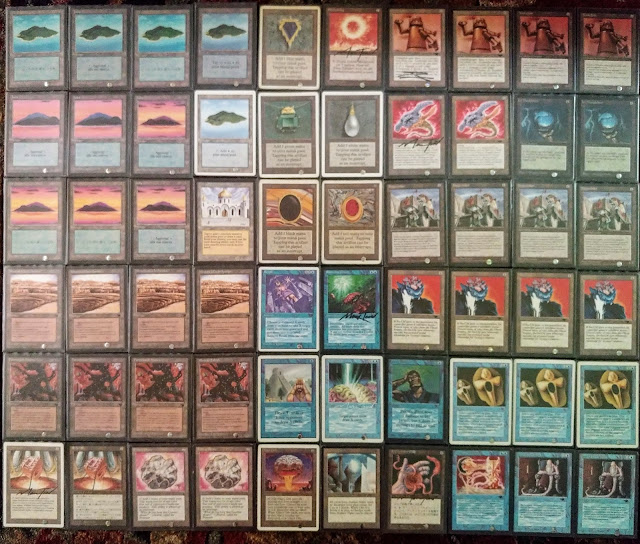 It's September! There aren't any local old school meet ups going on in the area this month, but I did put this together for a few casual games around the house. At the last tournament, I was gifted some store credit after my dismal performance that resulted in me getting a few more copies of Copy Artifact. So, I thought I'd throw them into a deck with the Sage.

The deck worked fine. The easiest comparison is to the all-colorless version of this deck. It's not a big surprise, but the blue version feels way more powerful. There's something about ripping an Ancestral Recall off the top when you are staring at the edge of darkness that you just don't get with the colorless version.

All of my casual games were against my daughter who has good, but modern decks. Nothing too crazy. It's eye-opening to play against modern cards and synergies to see just how powerful the new cards are compared to the old cards. It's not that Ancestral Recall isn't still broken - it is. It's that there are a lot more cards that work well together and produce interesting board states. It also doesn't hurt that modern creatures are more efficient and more powerful than old school counterparts. When I think about artifact creatures I can cast for 6 mana now compared to back then, it's no contest.

Even though we were playing without mana burn, I kept track of times the Su-Chi would have burned me. It was a lot. There's probably a lesson here. Maybe in formats with mana burn, that slot should be Black Vise or the number of Su-Chi should be trimmed. I also tried a couple of Fellwar Stone in place of the full set of Mana Vaults. This is probably another good call. I wasn't sitting behind a wall of Mana Vaults pinging me every single turn. The Fellwar Stones are slower of course, but do provide an additional mana every turn instead of all at once like the Mana Vaults. I'm guessing that slotting in Fellwar Stones, Black Vises, and Howling Mines by taking out some of the Mana Vaults, Su-Chi, and Tawnos' Coffins would make the all-colorless deck perform better.

In one of the games, I played a Chaos Orb and then copied it. I was able to make three more copies of it that game thanks to multiple Copy Artifact and Recall. I never missed a flip. I'm pretty sure I used up all my Orb flipping mojo.