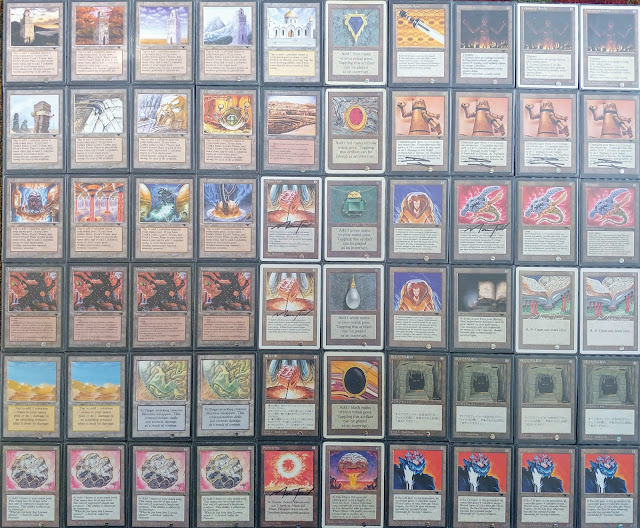 It's December! That makes it 12 months of Old School MTG decks on this blog. My deck for this month includes robots, of course. It's based on a deck by Anne J called "Big Boys (Don't Cry)."

My version is missing a few cards that Anne J has, but the swaps don't hurt me too bad. I'd argue that Anne J should find a way to include Fellwar Stone in the deck.

This deck does all the things that I want to do. It's colorless. It ramps. It tops out with a 9/9 trampler. There's shooty robots and flyie robots. It draws hella cards. It does tricks with the Coffin. It has a sweet Sword. And is looks cool!

In the few games I've played with it this month so far, I've won with the Sword once, untapped a Colossus after damage with a Maze, killed small creatures with my Deserts, and had multiple Howling Mines on the field. Good times.

Against certain decks, feeding your opponent cards is not a great plan. The deck lacks a "come from behind" option. A theoretical sideboard would have Black Vise, Disk, and Relic Barrier.

Anne J's version of the deck uses Candelabra. It's a sweet card. I would certainly run at least one copy if I had it. There's all kinds of tricks, including double-Maze activations, double-pumping your Factories, ramping like crazy with Tron out, and more!

Almost 20 years ago, I used to play a 75-card singleton 5-color deck. We would get these crazy 10+ person group games going at my college. My goal was to be as defensive as possible. My deck didn't really do anything, but it played all the cards I liked including a signed Candelabra. I later traded this card away, but one memory I have of playing with it was in a group game where the opponent to the left of me cast a spell that allowed him to look at my top card and put it back. He looked at the card and said, "Oh, I know what you're up to." I had to wait for it to come around to my turn to find out which card was on top. It was the Candelabra. To the day, I don't know what he thought I was up to. I just used it to fix my janky 5c mana base. As with many cards I've traded away over the years, I wish I still had it.
Posted by Eric Petracca at 4:12 PM